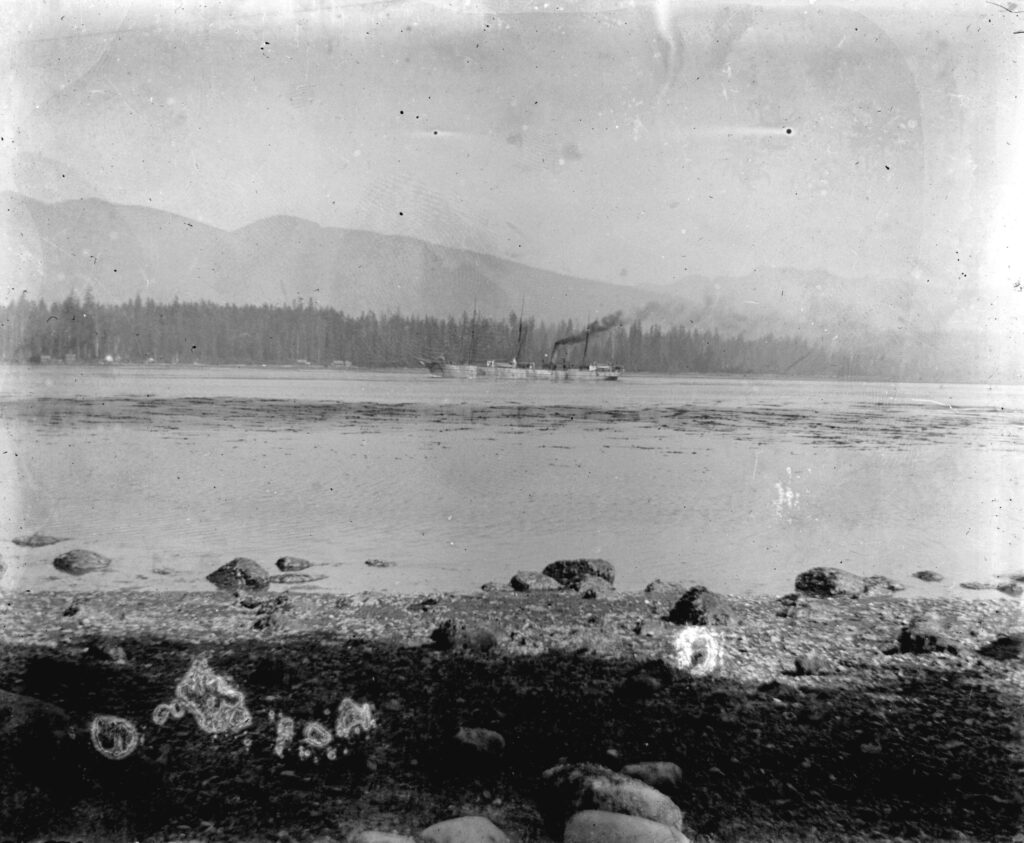 The City cannot offer a bonus or a subsidy to a steamship for regular market day service unless the subsidy is first approved by the electors. The City will pay Sister Francis $4.00 a week for the care of Mrs. Richardson, $4.00 being the same rate as St. Paul’s Hospital. The Recreation Grounds committee reported good progress with the Consolidated Light & Railway company toward the company developing a recreation ground in Stanley Park in exchange for being allowed to run their tracks nearby.

This transcript was made in 2021 by Transcribimus volunteer Gerald Soon

From Chas Woodward etal asking that the band be required to play on Westminster Av.
Laid over

From E. A. Charlies asking for a free site for a Dry Dock
Referred to the Finance Committee

From Geo Martin asking that Ontario Street be opened up to the City Boundary.
Referred to the Board of Works

From S.D. Pope, Superintendent of Education stating that the issue of a cheque for the schools was a matter to be arranged between the Government and the City.
The City Clerk was instructed to write for explanations

From F.S. Barnard, President of the Consolidated Railway and Light Co. asking that the Engineer be instructed to locate the new lights.
Referred to the Light Committee

From the City Solicitor stating that it would be necessary to submit a By-Law to the electors to authorize a bonus for the running of a steamer between Chilliwack and Vancouver.
Filed

From Mrs John McLennan asking the City to take charge of Mrs Addison an inmate of the Woman’s Home as the same was about to be closed up.
Referred to the Health Committee

From R.G. Tatlow asking the Mayor to write to New Westminster for the use of their rock crusher.
The City Clerk was instructed to write.

From C. Sweeny etal asking that a License be not granted to run a Laundry in a building between Pender and Dunsmuir streets on the west side of Seymour St
Referred to the Police Committee

From Mason & Co complaining about the License Inspector
Filed.

In connection with these communications the following Report was received and read:-

across Coal Harbour and if there is no objection to so doing that a contract be drawn up with the Company containing the said proposals and such other conditions as may be thought necessary or advisable.

From W. Brown etal asking that the old sidewalk which has been replaced by a new one on Hornby Street be placed on the West side of the same street adjoining their premises
Referred to the Ward foreman for attention.

Petitions for improvements on 5th Av on Hornby Street and also on Helmcken Street were laid over pending the estimates.

Resolved that arrangements be made to have the shed removed at the foot of Georgia Street at the entrance to the bridge’s leading to the Park as it is unsightly in its present state.

The following accounts were recommended for payment:-

The Report was adopted on motion of Alderman Clandenning Seconded by Alderman Shaw.

The Water and Market Committee met on Wednesday April 1st 1896

Present – the full Board

From John Irving stating that he was Inquiring on putting a boat on the route between Fraser River points and Vancouver without asking any guarantee. Filed.

From Mr. D. McLennan offering to give a direct steam boat service twice a week between Chilliwack and Vancouver for a bonus of $100 per month contract to be for six months

Resolved that Captain McLennan’s offer to run a steamer between Chilliwack and Vancouver to be here at 7 a.m. on Tuesday and Friday of each week be accepted. That he have the use of the City slip. That he carry freight from Chilliwack to Vancouver at $2.50 per ton and from Langley to Vancouver at $2.00 and that an agreement be entered into with him for the faithful performance of his contract.

Be it further resolved that two market days be established each week viz on Tuesday and Friday and that the 1st opening be held on Tuesday the 14th next and that the Mayor be asked to open the market on that date.

That the City Clerk be instructed to announce the date of the opening and the rates that will be charged for conveying freight from the different points to Vancouver such announcement to be published once in the following papers viz the “Columbian” New Westminster the Chilliwack Progress and the Weekly World and News advertiser, Vancouver.

From S. Thompson and others asking that each Saturday be made a Market Day
No action taken

The Board then adjourned.

That the Clause in reference to the bonusing of a Steamer be struck out and that the City Clerk be instructed to notify Mr McLennan that the ByLaw granting such bonus must be voted on by the electors. Carried.

That the Report as amended be adopted.
Carried

The Finance Committee met on Thursday April 2nd 1896. Present – the full Board

From D. McGillivray stating that he had sold his street paving business to Armstrong and Morrison, and asking that Morrison’s name be substituted for his on the bond.

Resolved that his request be granted and that the City Solicitor be instructed to prepare a new bond for signature.

The Estimates were taken into consideration and the following communications in connection therewith filed:-

From Wm Ward asking that the salary of Officer

From F. Humphey and Dr Thomas asking that their respective salaries be increased.

From the Coroner asking that the City provide an ambulance.

The following provisions were to be made in the Estimates:-

The Board adjourned without finishing the consideration of the Estimates.

Present – the full Board; also the City Solicitor and Mr. F. S. Barnard on behalf of the Consolidated Railway and Light Co.

Resolved that a contract be entered into with the Consolidated Railway and Light Company but the City for lighting the City by the Company on the following terms:- The Contract to be for a period of ten years from the 1st of June 1896.

The Company to satisfy at least 200 arc lights in each position as may be decided by the Council at a rate of 27 ½ cts per light per night for 310 nights at least in every year.

If this Company is at any time required to supply further lights they shall do so at the request of Council at the following rates:-

If more than 250 are supplied then 26 cts per light per night for all lights supplied.

The lights to be of 2000 candle power each. Provided that should the Council increase the number of lights above 200 or above 250

at any time they shall be so increased in number that the gross amount due to the Company for each night’s lighting shall not be decreased by each change.

The Company to deliver a bond to the City to the satisfaction of the City Council in the sum of $5000 liquidated damages for the due fulfilment of the contract. A contract to be drawn containing above terms and such other terms as may be considered in the interests of the City to invest therein.

From W. T. Steward asking for a portion of the $1000 forfeited by the City in consideration being the means of securing a cheaper light for the City.
Laid over

That the Report be adopted.
Carried

The following accounts were recommended for payment:-

From Miss Macfie asking that the nurses salaries be increased to $15.00 a month when they have served one year.
Laid over for estimates

Resolved that F. W. Thomas, Cemetery Caretaker be paid $5.00 per month dating from the 2nd of March for his wife’s attendance on the telephone.

That the contract referred to in the Report of the Light Committee shall also contain a clause stipulating that the Company shall not charge consumers of incandescent light any larger price or prices than that or those at present thus charged and the same rebate as now shall be allowed such consumers during the term of the contract. Also that the City shall have the right to purchase all the electric light plant and properties at a valuation based on actual cost at any time during the term of contract. Carried.

That the following By-Laws be reconsidered and finally passed and authorized to be signed by the Mayor and City Clerk and the Corporate Seal affixed thereto viz:- A By-Law to fix the remuneration to be paid to the Mayor and A By-Law to repeal By_Law No 236. Carried

These By-Laws were accordingly reconsidered and finally passed.

Alderman Schon gave notice that at next meeting of Council he would introduce a By-Law to authorize the subsidising of a Steamer to run between Fraser River points and Vancouver.

Alderman Banfield gave notice of his intention to introduce a By-Law making a grant of $5000 in aid of a public gathering to be held in the City about the end of August 1896 at which aquatic and athletic sports are to be held the competition thereat to be open to the World and provided that Messrs Stansbury and Gautier agree to complete thereat and that the By-Law will be submitted to the Citizens for their consent on or before about the 21st day of April 1896 and notice to be inserted in the Advertiser and World at least three times a week for two weeks.