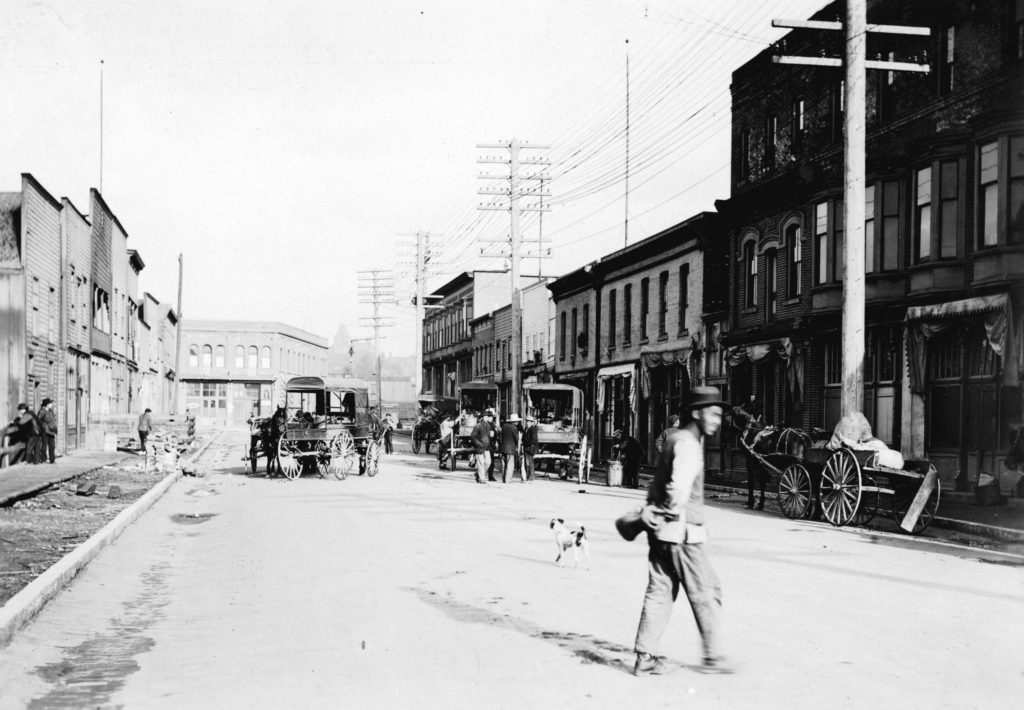 Alderman McGuigan moved and alderman Gavan seconded that henceforth all Committee meetings be held in private. Liquor license payments to be refunded for unsuccessful applicants. Letter received from Miss Bowes, a frequent writer to Council, drawing attention to the Social Evil (prostitution) and gambling.

The minutes of last meeting were read and adopted.

The following communications were received and read:
From Miss Bowes et al drawing attention to the Social evil and gambling.
Referred to Police Committee

From W.B. Ross complaining about the annoyance caused him by the City officials.
Referred to Police Committee

From Wilson McKinnon et al asking for the Market Hall for Locksley Lucas for discussing the Chinese question.
Referred to Police Committee with power to act.

From the Reporters asking for more accommodation for reporting.
Referred to Finance Committee

From E.V. Bodwell, solicitor for H.B. Warren requiring particulars as to defence from the City Solicitor.
Already attended to by order.

From the City Solicitor advising the Council that Messrs. Abray and Haywood, Godfrey +& Co and Clark and Co. had no claim for damages.
Filed

From the City Solicitor advising the City not to pay any more money to Mr. Morgan until he completes his contract to the satisfaction of the City Engineer.
Referred to Board of ­­­Works

From the Market Clerk reporting on the receipts.
Filed

From the Chief of Police reporting on the Electric Lights.
Filed

From G.A. Roedde claiming the contract for all binding last year.
Referred to Finance Committee

From the City Solicitor stating that there was no remedy regarding the feed merchants’ petition.
Filed

From W.J. Gallagher claiming $82.50 for not receiving the printing of the Debentures.
Referred to Finance Committee

From W.J. Dowler acknowledging receipt of communication re lepers.
Filed

From the City Clerk of Port Arthur asking to be furnished with the area of the City.
Referred to City Clerk for reply

From D. Oppenheimer asking that the Council give their attention to the Sir John A. McDonald Memorial Fund.
Referred to Finance Committee

From Joseph Brown asking for damages for the loss of his election list.
Filed

From Peter Walgrew asking for damages for the burning of his house in Stanley Park.
Referred to City Solicitor and Park Commissioners

From J.A. Codwell asking that the Mayor’s address be not printed in pamphleted form.
Filed

From Authors & Cox reporting that they had forwarded Pitts Leg.
Referred to Health Committee

From Mrs. Webster enclosing a resolution passed by the Directors of the Women’s Hospital appointing the Chairman of the Finance and Health Honorary Trustees and Directors of said Hospital.
Referred to Health Committee

From Marshall & Macrae asking for a share of the City’s stationery.
Referred to Finance Committee

From Alex Struthers et al asking that the sidewalk on Barclay Street be widened and the street cleared of rubbish.
Referred to Board of Works

From the Speaker of the B.C. Legislature inviting the Mayor and Aldermen to be present at the opening of said Legislature on the 28th inst.
The Clerk was instructed to accept the invitation on behalf of the Mayor and Council.

From C. Gardner Johnson asking for the …

… grading of 8th Av from Centre Street East.
Referred to Board of Works

From C. Gardner Johnson asking for a light on the corner of Centre Street and 9th Av.
Referred to F.W. & L. Committee

The following reports were received and read:

1) That the Mayor and City Clerk be authorized to sign the contract between Smead Dowd & Co. and the City for the heating of the hospital.
2) That Stanley James be reappointed City Auditor.
3) That 3000 Annual Reports be printed for distribution and that Aldermen Anderson and Odlum be appointed to revise them before they are printed.
4) That the following liquor license moneys be refunded:
Avis, M. Winters $ 220.00
C.A. Drilling 100.00
McCoskery & Beer 10.00
J. Brown 20.00
5) That the following tenders be accepted for supplies for 1892:
Bread: J.P. Blake for first half year
John Sciutto for second half year
[Volume 4, page 636]

It was recommended:
1) That a Committee consisting of the Chairman and Aldermen Scoullar and Mills be appointed to examine the hose wagon now being …

The Committee decided to hold its regular meetings on the 2nd Wednesday of each month at 5 P.M.
Signed: J.L. Franklin, Chairman

From J.M. Browning re site for storage purposes. – Laid over

From Mrs. Webster re a sidewalk to the Women’s Hospital. – Referred to City Engineer

From W.H. Kendall re account for breakage to rock crusher. – Referred to City Solicitor

From G.G. McKay re drainage – Laid over until City Engineer gives complete report on drainage.

The Board agreed to meet on Tuesday at 10 o’clock and drive around the City to see what improvements were necessary during the year.
Signed J.J. Gavan for Chairman

Moved by Alderman Connon
Seconded by Alderman Odlum
That the Board of Works be empowered to have water tanks located on Mount Pleasant for fire purposes.
Carried