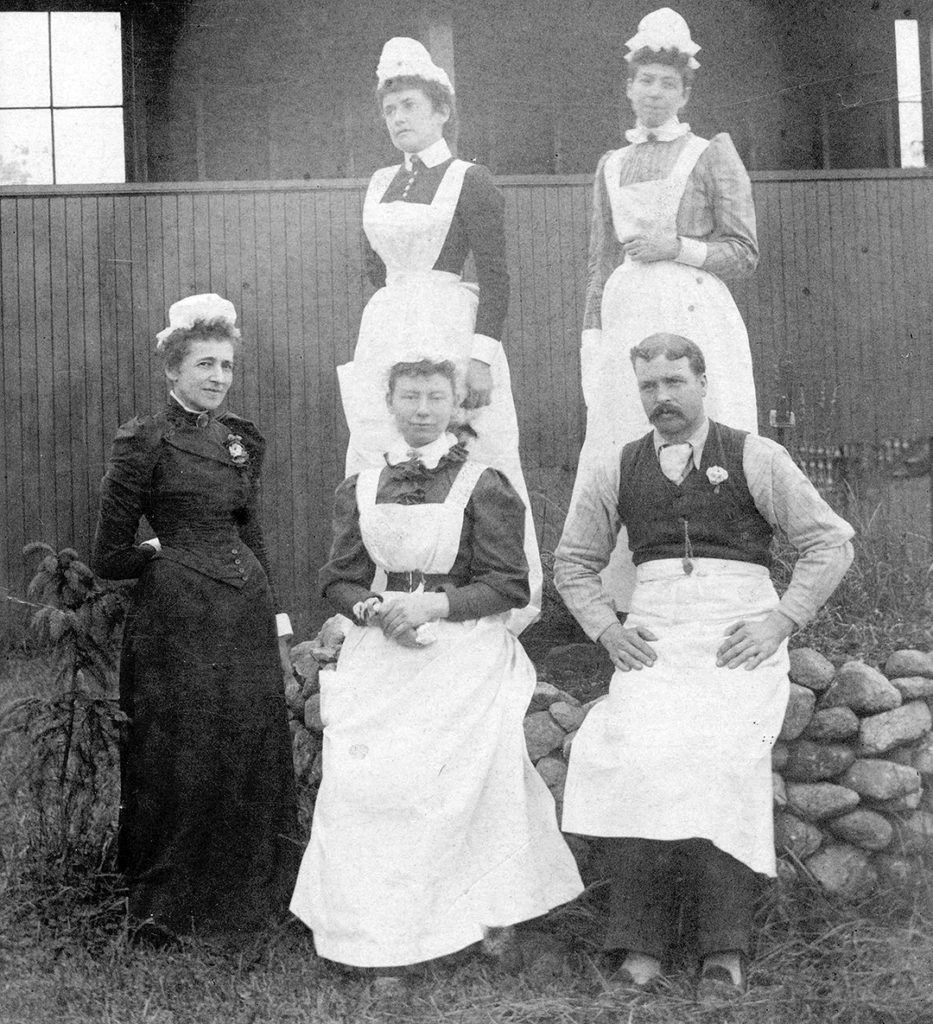 Establishment of professional fire department. Chief engineer J. H. Carlyle’s salary was set at $75 per month; firemen, stokers and drivers were paid $40; and additional on-call men were paid $15. At the same time, Miss Swan as matron of the city hospital to be paid $40 per month, two female nurses were paid $20 and $25, and the male night nurse and porter were each paid $30.

From John Ellis, applying for the position of Sewerage Clerk. Referred to the Board of Works.

From Herbert G. Lewis asking permission to use a portion of Broughton Point as a site for a Fog Bell. Referred to the Board of Works.

From W. H. Steeves of the North Arm of the Fraser River inviting the Mayor and Aldermen to be present at the opening of the bridges across said river. Referred to Finance Committee.

From C. Foley et al praying that a sidewalk be constructed on Powell Street east. Referred to Board of Works.

From J. F. McFarlane et al praying the lane in Block 22, 541 be planked. Referred to the Board of Works.

From E. Cook asking permission to use a hoisting engine on the Lefevre Block. Filed.

From Innes & Richards acknowledging receipt of communication re: Insurance. Filed.

From Jonas Watt, Secretary of Dominion Sanitary and Cremating Co giving estimates of the cost of erecting a crematory in Vancouver. Referred to Board of Works.

From James B. Kennedy asking that the sidewalk on Dunsmuir St between Hamilton & Cambie be made six feet wide instead of three feet. Referred to Board of Works.

Alderman Horne being appointed Chairman. We beg to recommend:

1. That the following tenders be accepted:

2. That Prior St be gravelled 16 feet wide from Westminster Avenue West about 100 feet and a drain dug along the North Side, also that Harris St be gravelled for 150 feet.

3. That tenders be called for the following works:

4. That the City Engineer be instructed to prepare the ground for the fountain on the corner of Hastings and Carrall Streets.

5. Complaints having repeatedly being made in cases where buildings are erected or repaired that the provisions of By-Law No 40 clause 2 have not been enforced resulting in great inconvenience and danger to passers by; we therefore recommend that the Street Inspector be peremptorily directed to perform his duly in all cases and see that the By-Law is strictly enforced where buildings are now or may be hereafter under construction or repair.

6. That Mr. E. Mohun be paid $200.00 for preliminary Surveys in connection with Sewers.

7. That the following accounts be paid:

The Finance Committee met on Friday August 30, 1889 a full board being present:

The reports of the Fire, Water & Light and Health Committees were read and approved.

The Fire, Water & Light Committee met on Wednesday August 28th 1889 a full board being present:

We beg to recommend:

1. That the following accounts be paid:

2. That $349.36 be paid over to the Volunteer Fire Department to discharge their liabilities and that they be requested to furnish receipts to Council for amounts paid.

3. That the following appointments be made on the paid Fire Department:

Your Committee met the Directors of the Vancouver Water Works Co. on Thursday August 29th 1889 for the purpose of making arrangements regarding the rates to be charged for water other than for fire purposes and other matters connected with the City’s Water Supply.

The Directors stated they could not see their way clear to make the price of Water less than 60 cents per thousand gallons as the revenue from all sources barely part 4 per cent on their outlay.

The Company contemplate additional expenditure in connection with their system and before doing so wish to know the intentions of the City regarding its purchase.

They also wish the City to enter into an Agreement at once for the use of the hydrants as they are now prepared to give all the pressure required for fire purposes. All of which is respectfully submitted.

We beg to submit Agreement between the Vancouver Electric Illuminating Co. and the City for Street Lighting for adoption by Council.

We beg to recommend:

1. That the following accounts be paid:

3. That Miss Woodward and Miss Cummins be paid at the rate of $12.50 per month each from date of appointment to date

of change. Such payments to be made in lieu of Mrs. Birks’ Salary.

4. That a railing be placed around the lower story of the City Hospital.

Your Committee begs to recommend as follows:

1. That the office hours of the Police Magistrate be fixed at from 10 to 12 in the forenoon and from to 2 to 5 in the afternoon daily.

2. That Cab and dray stands be set apart on the following Streets:

3. That the following accounts be paid:

J. McLaren and J. Abray, action on which was deferred until Wednesday next September 4th at 2 P.
M. at which time Your Committee will again meet.

Communications from the Board of Trade re Trades License By-Law were received and read.

The following report was read from E. Mohun, C.E. on Sewer Pipes.

The Chairman and Tenders of the Board of Works.

I have the honor to report as follows on the tests to which the Samples of Sewer pipe furnished by Messrs Gladding and Mr. Bean of San Francisco have been submitted.
Inpermeability

This list was made by Mr. Walkem who found a pipe weighing 6 ½ lb after complete saturation had absorbed ¾ lb of water.

These tests were made with hydrochloric Nitric, Nitro Muriatic and Sulphuric Acids by Mr. Sorenson, who reports as follows:

The samples withstood the action of Nitric Acid, Sulphuric & the Nitro Muriatic Acids and was only slightly affected by hydrochloric Acid, the glaze of the pipe was in no particular affected.

This list was made at the C. P. R. Carshops by Mr. Cash and myself. The sample was a 16” diameter pipe.

We applied a crushing strain of 1370 lbs. per lineal foot without injuring the pipes. I did not, as it was the only complete specimen we had, consider it advisable to increase the weight until it was broken dangerous to retain it as the Standard Sample. The pipes are fairly concentric when formed and I have no hesitations in laying are a good class of Sewer Pipe judging from the results of the tests to which they have been submitted.

I have the honour to be, Gentlemen, Your most obedient Servant, E. Mohun, C.E.

The Agreement between the Vancouver Electric Illuminating Co and the City for Street Lighting was read and referred back to the City Solicitor for further amendments.

Moved by Alderman Horne, seconded by Alderman Salsbury. That E. Cook, Contractor be allowed to use a Steam hoist for lifting material upon the Lefevre Block, provided said hoist is properly protected from interfering with traffic on the street. Carried.

Moved by Alderman Horne, seconded by Alderman Oppenheimer. That the Board of Works be authorized to order the necessary Sewer Pipes as previously approved of by this Council. Carried.

Moved by Alderman Brewer, seconded by Alderman Costello. That the Sheriff of New Westminster District be notified that the City has a claim upon the Wharfage Company having given the said Wharfage Company the privilege of using the Northern extremity of Carrall Street as a public Wharf and as an approach to a public Wharf according to a certain agreement dated the 14th day of October 1886 and any such sale of such wharf can only be made subject to such agreement. Carried.

Consideration of By Laws

The Council went into Committee of the Whole of Wharf By-Law with Alderman Brewer in the Chair. The By-Law was read over clause by clause and reported back to Council.

For holding the election on the Wharf By-Law. Carried.

The By-Law was then read a first time.

The Council went into Committee of the Whole on By-Law with Alderman Brewer in the Chair.

The By-Law was read over clause by clause and reported back to Council as complete with amendments.

The By-Law was then ordered, signed, sealed, and gazetted.

Alderman Salsbury gave notice that at the next meeting of the Council he would introduce a ByLaw for the clearing and preparing of Brockton Point for Athletic purposes and for the clearing and preparing of a portion of the Eastern Park for the use of the British Columbia Jockey Club, in each case said portions of the Eastern and Western Parks to be under the control of the City Council and to be let to the Brockton Point Athletic Club and to the British Columbia Jockey Club respectively until the City shall be repaid for the amount of the expenditures on said portions of said parks respectively