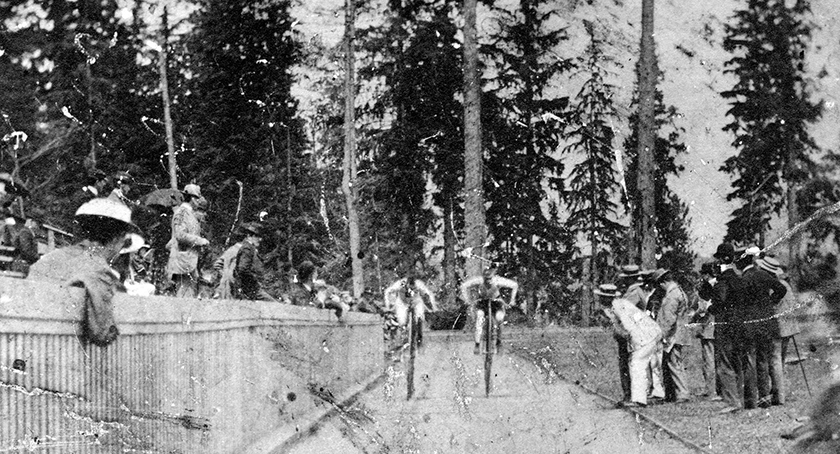 The Chief of Police was instructed to see that bicycle riders exercise more care to avoid accidents when riding on the public streets. Illustration shows a bicycle race at Brockton Oval July 1, 1893.

If the Methodist College settled in Vancouver, Council agreed the College could have Clark Park as part of their campus. Wednesday Sept 27 was declared a Civic Holiday.  Newspaper reported the holiday was so citizens could go to New Westminster to see the Royal Agricultural and Industrial Society Exhibition.

This transcript was made in 2019 by Transcribimus volunteer Gerald Soon

The Council met on Monday September 25th 1893
Present His Worship the Mayor and Aldermen Salsbury, Collins, Hackett, McCraney, Cargill, Hobson, Franklin, Towler and Brown.
The Minutes of last meeting were read and adopted.

From O’Rourke and Jervis asking for the removal of certain poles from the corner of Hastings & Carrall Streets.
Referred to the City Engineer to attend to at once.

From E.W. McLaren and many others urging the Council to take steps to secure the Columbia Methodist College for this City

Moved by Alderman McCraney
Seconded by “ Collins.
That whereas the Trustees of the Columbia Methodist College are at present ascertaining the best location whereon they can build and establish a College and educational institution open to all the citizens of British Columbia. And whereas it would be in the interest of the Citizens and to the material advantage of this City that the said College should be erected within the limits of this City.
Be it therefore resolved that in the opinion of this Council, provided all necessary arrangements can be made and that the said Trustees undertakes to erect a College and other buildings and carry on the Educational Institution as stated by them in their interview with the Finance Committee, there is no objection to the site known as Clark’s Park being used for the above purpose.

Moved in amendment by Alderman Towler
Seconded by Alderman Hobson.
That the matter be laid over for one week.
Amendment lost. Motion carried.

From O.R. Young asking for the improvement of Haro St.
Referred to the Board of Works.

From the Park Commissioners asking for another grant to pay current expenses.
Moved by Alderman Cargill
Seconded by “ Salsbury
That the sum of $500.00 be voted out of Finance and placed to their credit for the purposes mentioned in their resolution.
Carried.

From R. G. Tatlow, President of the Vancouver Loan Trust Savings and Guarantee be acknowledging receipt of Communication re extension of electric lighting service and expressing a desire to meet the members of the F.W. & L Committee at their next meeting.
Resolved.
That he be invited to attend.

From the Chief of Police reporting on the Electric lights.
Filed

From Champion & White asking for certain repairs to the crematory.
Referred to the Health Committee.

From James St. Charles stating that they had long ago signed the contract for the construction of the hose wagon and sent it to A.Q. St. George.
Resolved.
That the City Clerk be instructed to write to Mr. St. George and ask for the return of the contract.

From Alderman Anderson asking for six weeks leave of absence.
Moved by Alderman Salsbury
Seconded by “ Anderson . Collins
That his request be granted. Carried.

The following Reports were received and read,

The Finance Committee met on Friday September 22nd 1893.
Present – Aldermen Anderson, Cargill and Hobson.
It was recommended:-
1. That the following account be paid:-
News Advertising Advertising $3.75
2. That Alderman Cargill be appointed Chairman during the absence of Alderman Anderson.
sgd. R. A. Anderson
Chairman

Moved by Alderman Collins
Seconded by “ Hackett
That the Report be adopted. Carried.

that bicycle riders exercise more care to avoid accidents when riding on the public streets; also that he look after the breaking of windows and see that no depredations are committed.
4. That the City accountant be instructed to make out a statement showing the condition of the Committee’s estimates.
sgd Wm Fowler
Chairman

Moved by Alderman Hobson
Seconded by “ Salsbury
That the Report be adopted.
Carried.

2. That the City Clerk be instructed to rectify Wm Frodsharm, who complained about the Crematory that everything possible will be done in future to abate the nuisance of any kind.

Upon the Board and discussed proposed amendments to the Plumbing By-Laws.
After hearing their suggestions the Committee promised to consider them when the By-Law came up for discussion
sgd Henry Collins
Chairman

Moved by Alderman Fowler
Seconded by “ Cargill
That the Report be adopted.
Carried.

The Board of Works met on Sept 21st 1893.
Present – Aldermen Haskett (in the Chair) Brown, Franklin, and Salsbury.
It was recommended:-
1. That the plan submitted by Dixon and McDermid for the basement of the “Inns of Court” be approved subject to copy of same being deposited in the City Engineer’s office and a suitable bond signed by the owner for excavating under the sidewalk on Hamilton Street, the area under the sidewalk not to extend more than 11 feet out.
2. That the Superintendent of the Street Railway Co. be informed that unless the matter of building up the railway tracks at the intersection of Carrall and Powell Streets is attended to under the terms of their agreement with the City, the City will have the work done and the cost charged against the Company or its trustees.
3. That the communication from Baker Bros. and Meyljer & Liberty regarding the flooding of their respective cellars be referred to the City Engineer to examine into the complaints and report on Thursday next.
4. That the communication from John Devine re the filling in of a hole in front of his house on 6th Av be referred to the City Engineer to see

where earth can be easily obtained to make the rest of this fill as soon as possible.
5. That Robert Clark be permitted to put in gratings in the sidewalk surrounding his building on Carrall and Cordova Street east provided the work is carried out to the satisfaction of the City Engineer.
6. That the Fire Inspector be instructed to see that the By-Law is acceded to regarding the raising of the Sherman House restaurant.
7. That the City Engineer be instructed to give directions to Mr. Thomas, Contractor as to what is required to be done in order to finish his contract for grading the lane in Block 16.196.

The board then adjourned to meet again on the 23rd next to open tenders and pass accounts.
sgd J.W. Hackett
Acting Chairman

It was resolved to pay C. Macaulay only $3.00 per day for waiting on Dues Llewellyn in place of $4.00 as allowed on the payroll pending the meeting of the F.W. & L. Committee.

Moved by Aldermen McCraney
Seconded by “ Collins.
That the City Treasurer be and is hereby restricted to pay the Doctors’ bill and funeral expenses of the late Angus Campbell, killed at the Narrows, the hotel sum not to exceed the sum of $100.00       Carried

Moved by Alderman Franklin
Seconded by “ McCraney
That the City Solicitor attend the Supreme Court – Ottawa on behalf of the City on the hearing of the case of C.P.R vs. the City.

Moved by Alderman McCraney
Seconded by “ Brown.
That the Mayor be authorized to declare Wednesday next the 27th next a Civic holiday. Carried.

The Question of heating the old wing to the City Hospital was referred to the Board of Health with power to act.

Plumbers, Board of Works will meet to amend the plumbing bylaw – September 18, 1893