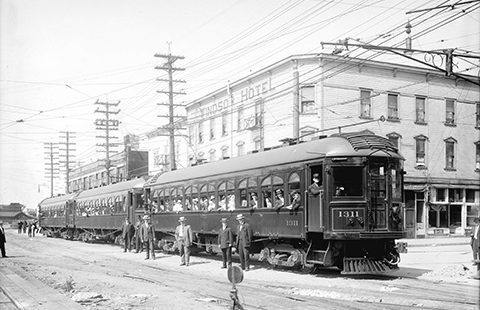 Mayor Cope cast the deciding vote on a motion to postpone third reading of the the Railway Bonus By-law. In favour of adjourning the meeting till the next morning: Aldermen Collins, Scoullar, Gavin & Mills. Opposed to a delay: Anderson, McGuigan, McCraney, & Franklin. Mayor Cope decided to proceed with the third reading, rather than put off the issue till next morning.

The following communications were received and read:

From Evans, Colemans, and Evans complaining about the Scavenger dumping into the hopper near their business.
Referred to the Board of Health

From the Committee on Management inviting the Mayor and Aldermen to an Entertainment in the Market Hall on the 27th inst.
Moved by Alderman McCraney
Seconded by ” Scouller
That the invitation be accepted.
Carried.

From A. St. G. Hammersly in reference to the expropriation of the lots at the foot of Westminster Av.
Filed

From Geo Gagen asking that the Poll Tax Collector be instructed to collect taxes from Sailor coming in the unload vessels.
Referred to the Finance Committee

From John MacLaren reporting on the Electric Lights.
Filed

From C. A. Jopson asking for a sidewalk on Princess Street and additional street light.
Referred to Board of Works & “unreadable”

From C. I. Knowdell asking that a culvert be stopped up on Davie Street.
Referred to the Street Inspector with the power to act.

The following Reports were Received and read.

The Board of Works met on Thursday September 23rd 1892.
Present: Aldermen McCraney, Gavin, Scoullar, and Franklin

It was recommended:
1. That Dr. W.H. Kendall’s contract for the supply of crushed rock be extended to include the amount desired by D. MacGillivray in his contract.

3. That the Street Inspector be required to furnish the City Solicitor with all the information he requires relative to the Sewer where Leatherdale + Smith’s horse was injured.

4. That the City Engineer interview the owners of the property at the S.E. Corner of Pender and Seymour Streets and see about having the side walk put back in its proper place as soon as possible or the building proceeded with.

5. That the Street Inspector be instructed to put men on to complete D. J. McDonald’s contract of 1889 on 13th Av without delay.

It was recommended:-
1. That G. W. Fuller be awarded the contract for Cementing the basement floor of the Market hall at $1.35 per yard.

2. That tenders be invited for the furnishing of Police uniforms and waterproof coats.

3. That the City Engineer be instructed to have the leaks stopped in the roof of the Market Hall without delay.

Moved by Alderman Gavin
Seconded by ” Franklin
That the Report be adopted.
Carried.

2. That a map of the Province be purchased, from the Dominion Publishing Co. and that an official Directory for 1893 be purchased from the Williams Directory Co.
sgd R.A. Anderson,
Chairman
Moved by Alderman Anderson
Seconded by “ Mills
That the Report be adopted.
Carried

The D. W. & L Committee met on Tuesday, September 20th 1892,
Present: Aldermen Franklin, Scoullar, McGuigan and Mills.
It was recommended:-
1. That Hobson Bros. be allowed to withdraw their tender on the laying of the water pipes.

2. That a team of horses be purchased for the Chemical engine and that J. C. Campbell be appointed nozzleman for same

3. That Henry Duncan and G. McDonald be appointed hosemen at a salary of $48.00 per month each

4. That a Gong and Indicator be ordered and also two Street fire alarm boxes.

5. That Section No one of the pipe laying contract be awarded to Ceileh & Eadson and Sections 2 & 3 to Costello & Munro.

6. That W. P. Turner, Wm Lyman & A. W Dresser be appointed to Inspector of the laying of the water pipes at a salary of $3.00 per day each.
sgd J.L. Franklin
Chairman

Moved by Alderman Franklin
Seconded by ” McGuigan
That the Report be adopted.
Carried

Introduction of By-Laws
Moved by Alderman McCraney
Seconded by ” Collins

That the trades license By-Law be intruded a read a first time.
Carried

Moved by Alderman McCraney
Seconded by ” Collins
That the rules be suspended and the By-Law be read a second time.
Carried

Moved by Alderman McCraney
Seconded by ” Franklin
That the Council go into Committee of the Whole for the consideration of the By-Law.
Carried

The By-Law was read over clause by clause and reported to Council as complete.

Moved by Alderman Anderson
Seconded by ” McCraney
That the By-Law granting a bonus of $3000.00 to the Burrard Inlet and Fraser Valley Ry Co be read a 3rd time

Motion Carried.
The By-law was accordingly read a 3rd time.

The Council then adjourned